They did what they had to,
so they cross over illegally.
Now the Mediterranean screams
their name, floating their souls.
If they did not have ambition, they
would not leave for a better life.
Yet death snatch them tragic,
mocking their will to love – to eat – to breathe.

Noirfifre
Southern Street
WordPress
~.~
27th of March 2015
~.~
La Vie
Senior Manager
Earth’s Business
~.~
Dear Ms Vie,
I write this letter to you simply to ask, “What’s up.” Wipe out that confused look I know you are wearing now. Why are you – urgh – I mean you must know I would pop my head into your mail at some point? What are you doing to me and why are you doing it?

Am I a part of a continuous case study? If yes then you have enough research material, so just call it off, please. Enough is enough! I have had enough of mountain climbing lessons. Do you think if I have not learned what it is, I will ever get the concept? Speak in plainer words because I do not understand you.

You are suffocating with all that heat and very little wind to aid in my living. I know you like seeing me suffer; laugh now because you shall not laugh forever. You are misery spreading your miserable tactics, trying to pass it off as tough love. Hold your method of teaching lessons because it is not working. What do you want from me, just let me live. All I want is to work hard and reap benefits from that toil but you will not let me. Why?

Not Yours At All Noirfifre 😦

I choose the epistle form of poetry to address Ms La Vie aka Life. Yes, I wrote a letter to life to ask her what is going on with the way she treats me. Yep, you are thinking that I have some few loose screws but I have to write out those feelings or allow them to slowly poison. I choose venting in a letter any day over poison. 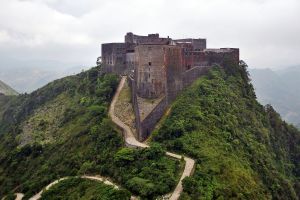 Your beauty celebrated many moons ago.

Not just for your physical most probably, wealth.

They called you “Pearl of the Antilles,” chateaus.

Ships sailed in, ships float out of her harbours.

They cried, no one listened, revolted many days.

No caving, that freedom forever they craved.

The black and mulattoes called her Haiti.

So many claimed power, stability never.

Yet you – your memories call Ayiti.

One day, you will raise again, valiantly.

Whenever I read of the negatives of Haiti [which is much more than the positive], I always lament how an island so rich in times past became the poorest nation in the West Hemisphere. I believe that one day Haiti can climb those necessary steps back to stability and economic substance needed for a people’s survival. I chose the Ode form for structure, as away to celebrate Haiti. There are positives on a her shores, one day they will flow more freely to her lands. Strive on Haiti, strive on!