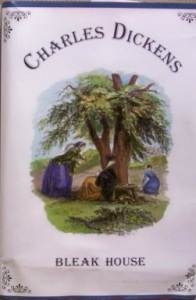 I feel, I feel like I stumbled upon a fantastic prose wrapped in a whirlwind of events that I cannot fathom how Dickens [called CD hereafter] planned the story. It moved at a pace which left me desperate for him to just spell it out but CD threw Jarndyce and Jarndyce in my face for so many chapters. Oh boy was I steaming mad!
How can he pulled me in with my immediate liking for Esther [ Jane Eyre long-lost sister] and that near perfect description of the scenery in the first few chapters then kill me with an ever going legal battle of a confusing will. However, CD redeemed in shining colours with a tone of humour “his whole existence was a summer joke” and mystery. Tell me, tell me now will Ana take the veil with Richard? Will Esther marry her guardian? What is Mr. Tulkinghorn up too with his manipulating ways. CD came up with the mother load of subplots which he managed to pull so artfully and sometimes confusedly into the main plot.
I would love to see the sketch plan for Bleak House to find out how CD connected the dots. How can the story leave me confused and yet so hype at the same time with an array of characters who felt secondary even when their role seemed minor. What was CD trying to say about mothers when he characterized  Mrs. Dedlock  or Mrs. Jellyby? I felt that he poked at the Judiciary and Executive  system with the jabs at the lawyers approach to the Jarndyce and Jarndyce matter and the names of the political office. Why did he use the saint like and moral compass for Esther? Yes, I know she is a Victorian character but in light of her ups and downs, she remained the church mouse pet and so forgiving and dutiful.
Did you see how the ending chapters answered so may questions? I needed such an ending to tie in a continued intrigue, it felt like the quaint epilogue that handles loose ends. However, I am still full of questions and so intrigued that I will definitely read some commentaries.

Please Do Share What Is On Your Mind? Cancel reply