On the eleventh day of the eleventh month at the eleventh hour (am) Germany and the Allies, agreed in the Armistice of Compiègne  to end fighting for World War I.  The armistice named after the location  in France where the signing took place, in a  carriage of a private train. 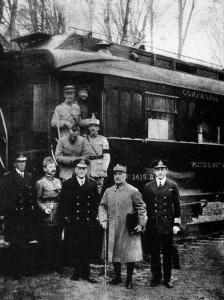 Source: This image (or other media file) is in the public domain because its copyright has expired and its author is anonymous, via wikipedia.org

It is from this date  later, the Commonwealth of Nations commemorate the death of many soldiers.  Many other nations mark Remembrance Sunday closest to the 11th or other dates marking specific days of victory from the War in Europe. Many persons wear paper poppies especially school children  to show their respect for the men who served. As a child I remember all proceeds from the sale of the poppies went to the surviving soldiers who served in World War II.

In addition, the day is also known as Poppy Day.  Canadian Lieutenant John McCrae, a physician penned a poem during the first World War. It was after the funeral service for his friend/soldier Alexis Helmer  on May 3rd , 1915, of his friend.  McCrae reference of the red poppies growing over the grave of soldiers made the poppies a symbol for fallen soldiers. 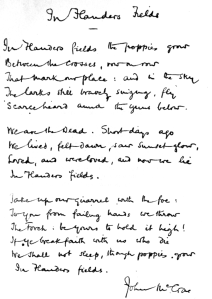 Source:This work is in the public domain in its country of origin and other countries via wikipedia.org

Please Do Share What Is On Your Mind? Cancel reply